The Swiss American composer Daniel was born 1961 in Zurich, Switzerland and lives in New York City. 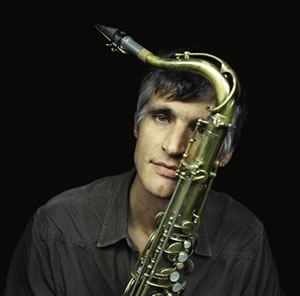 He frequently performs with his special chamber music project for saxophone and string quartet, combining composition and improvisation, jazz and traditional chamber music, a format also featured at the Gaia Festival 2015.

The extended catalogue of his chamber music works gets performed and recorded all around the globe.

Daniel Schnyder's new Opera "Abraham" was premiered in Duesseldorf in November 2014. "Charlie Parker's Yardbird", a commission by Opera Philadelphia, will be premiered in June 2015 with Laurence Brownlee as Charlie Parker. The New York premiere of the work will take place at Harlem's legendary "Apollo Theater" in June 2016 with the New York Philharmonic.

Two concerti for ethnic instruments, his Pipa Concerto and his Alphorn Concerto, were premiered in the 2005/06 season to great acclaim. Daniel Schnyder wrote also a concerto for the Libanese Nay virtuoso Bassam Saba, that became the centerpiece of his special festival program: "Arabian Night".

His symphonic work "Sundiata Keita" for Large Symphony Orchestra, Chorus and 4 soloists from Mali playing traditional instruments was successfully premiered at the Berlin Philharmony during his stay as composer in residence with the RSO in Berlin.

The new album, showing his collaboration with the eminent bass trombonist Stefan Schulz is entitled "Händel in Harlem", a reinvention of Händels Trio Sonatas.

A new album, entitled "Art of the Duo", will be released in 2015, featuring legendary bass trombone virtuoso David Taylor and Schnyder on saxophone.

Daniel Schnyder won first prize at the 1996 International Trumpet Guild's Composition Contest. His Trumpet Sonata was selected as one of the official pieces for the Concours Maurice André pour Trompette 2003 (Paris). He won also numerous awards for his chamber music by the International Flute Association, the International Clarinet Association, the City of Zurich, Pro Helvetia, the National Art Council of Switzerland, the American Symphony League and Meet the Composer.

He holds master classes in composition, chamber music, improvisation and saxophone at the Hochschule für Musik in Stuttgart, the Baltic Youth Philharmonic and the Bruckner University in Linz.

He also works as a consultant with major festivals, promoters and ensembles, trying to bridge the worlds of classical music, jazz and ethnic music in innovative ways.

2014 he also 'recomposed' the lost opera "Alceste" by Händel for the Händel Festival 2014 in Halle (Germany) featuring Kristjan Jaervi, the MDR Orchestra, Thomas Dobler on vibes and himself on saxophone.

Absolute Ensemble released a CD in 2014 on Sony Classical with Daniel Schnyder's "ToopART Reinventions", a new work reflecting on Bach's Two Part Inventions, featuring Simone Dinnerstein on piano and himself on sax.

The opera companies of Atlanta and Phoenix Arizona and Seattle Opera will play Daniel Schnyder’s Opera Charlie Parker’s Yardbird in the 2018/9 season. His Tenor Trombone Concerto is played for the first time in Germany by the eminent young trombonist Frederic Belli in October 2018. His Alphorn Concerto will be played in February 2019 in Nürnberg Germany by Alphorn Virtuoso Arkady Shilkloper. Daniel Schnyder’s ‘Double Concerto for Saxophone and Bass Trombone’ was played for the first time in Switzerland by David Taylor and Daniel Schnyder and the Bern Symphony Orchestra under the baton of Mario Venzago in March 2018.